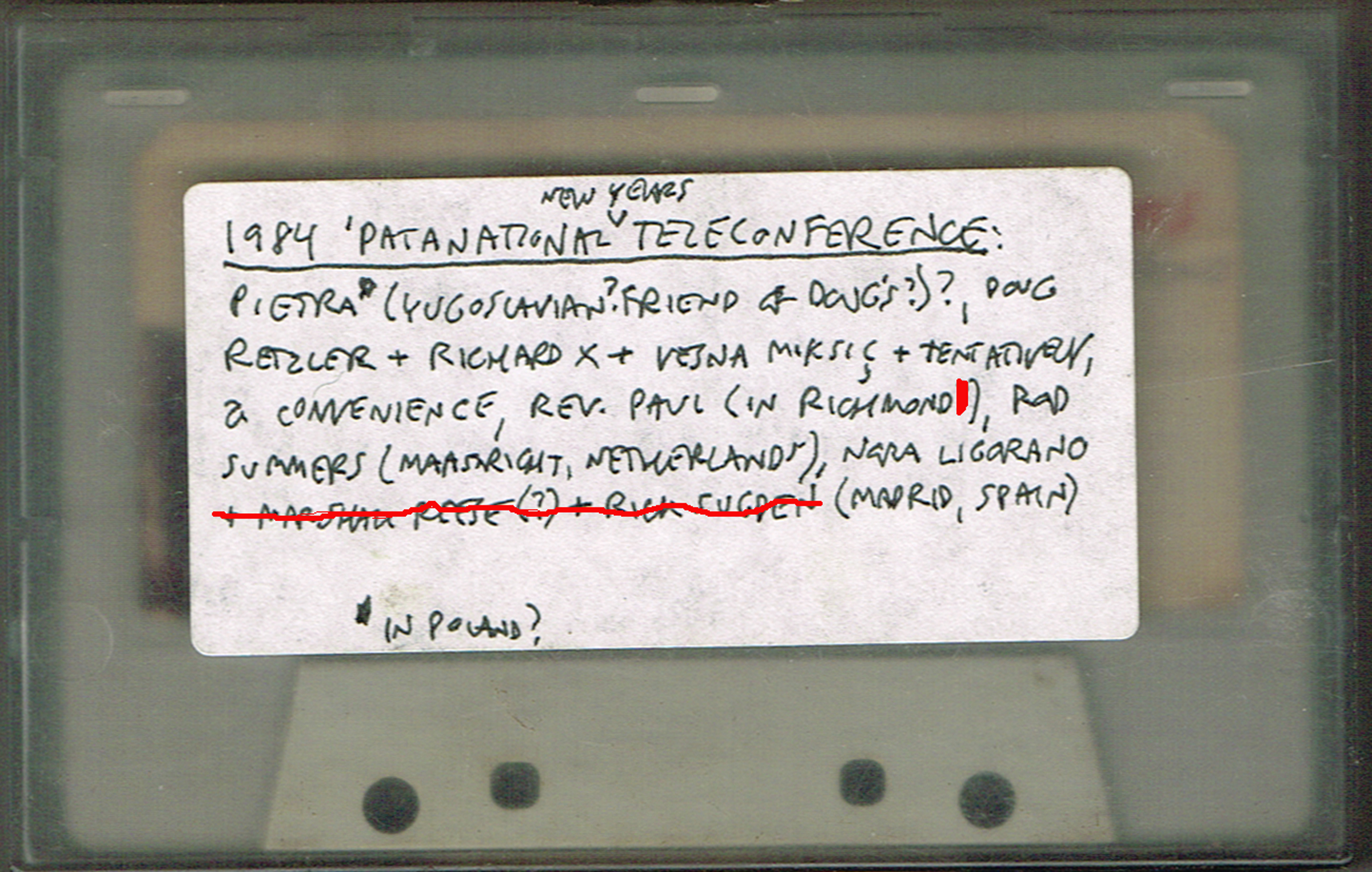 "1984 'Patanational New Year's Teleconference": In this 2020 Cowardly New World of almost total Mind Control & the embracing of Big Brother by entirely too many who seem to somehow expect salvation from giving up their civil rights to 'higher powers' (read "billionaires") at least we have improved international video conferencing.  Back on January 1, 1984, such a thing would've been still largely in the realm of science fiction.  Even phone conferencing would've been fairly new, at least to those of us participating here.  As such, in honor of George Orwell's prescient novel of WARNING, which, alas, most people seem to've forgotten about by now, a group of internationalists (&, in my case, a 'patanationalist) agreed to start off the deadly year with a bit of multi-lingual solidarity.  At the beginning of this recording, there's the sound of the people at the Crater BalTimOre end of things: X Richard; Doug Retzler; Vesna Miksiç; & tENTATIVELY, a cONVENIENCE.  Richard, tENT, & Doug had more or less cofounded "B.U.T.N.", the BalTimOre Underground Telephone (or, as I prefer, "Telectropheremoanin'") Network: a group of telephone numbers that could be called for various participatory media possibilities.  The BalTimOre end of the teleconference might've been physically based in tENT's apartment since that's where both he & Vesna lived & since there were probably at least 2 phones there — or maybe it was somewhere else. Vesna was a Yugoslavian video artist then teaching at UMBC (University of Maryland, Baltimore County campus). It seems that Reverend Paul may've been the organizer/moderator of this.  Paul was a reverend in the Church of the SubGenius, a very enthusiastic Mail Artist, & a ceremonial magician.  Rod Summers was in Maastricht in the Netherlands & was the publisher of a 16 cassette series under the name of "VEC Audio Exchange" (VEC = Visual Experimental Concrete, if I remember correctly).  Nora Ligorano had been a BalTimOre based artist who'd moved to Madrid; tENTATIVELY, a cONVENIENCE?  Well, he speaks for himself, eh?!; X Richard was the founder of a time travel society called the Krononautic Organism that'd had a Party for People from the Future on March 9, 1982.  It's not clear to me whether that's Rick Sugden speaking but he was a gay activist who'd moved from Tampa to BalTimOre to NYC & then to Madrid where he was running a gay disco.  It seems that Vesna's friend in Yugoslavia was never reached & it's unclear whether Doug's friend Pietra, living in Poland, was ever reached.  It seems that there was a problem with the "Iron Curtain" countries.  Actual statements begin with Reverend Paul Summers (English & ?) at 5:27; 5:41 Rod Summers (English); 5:55 Nora Ligorano (Spanish); 6:17 tENTATIVELY, a cONVENIENCE (English, French, German); 6:39 Vesna Miksiç (French & English & ?); 7:00 Nora Ligorano (Spanish); 7:08 Richard X (English); 8:00 Rick Sugden? (English); 8:29 Doug Retzler (English).  Some of us had prepared statements, some were content to just spontaneously say something.  Vesna's "promising non-existent future" may sum it up somehow.  This was chaotic & somewhat unproductive but still a rare international meeting of some very creative minds.  - May 12, 2020 (Vision) notes from tENTATIVELY, a cONVENIENCE

Uploaded by tENTATIVELY, a cONVENIENCE on May 12, 2020